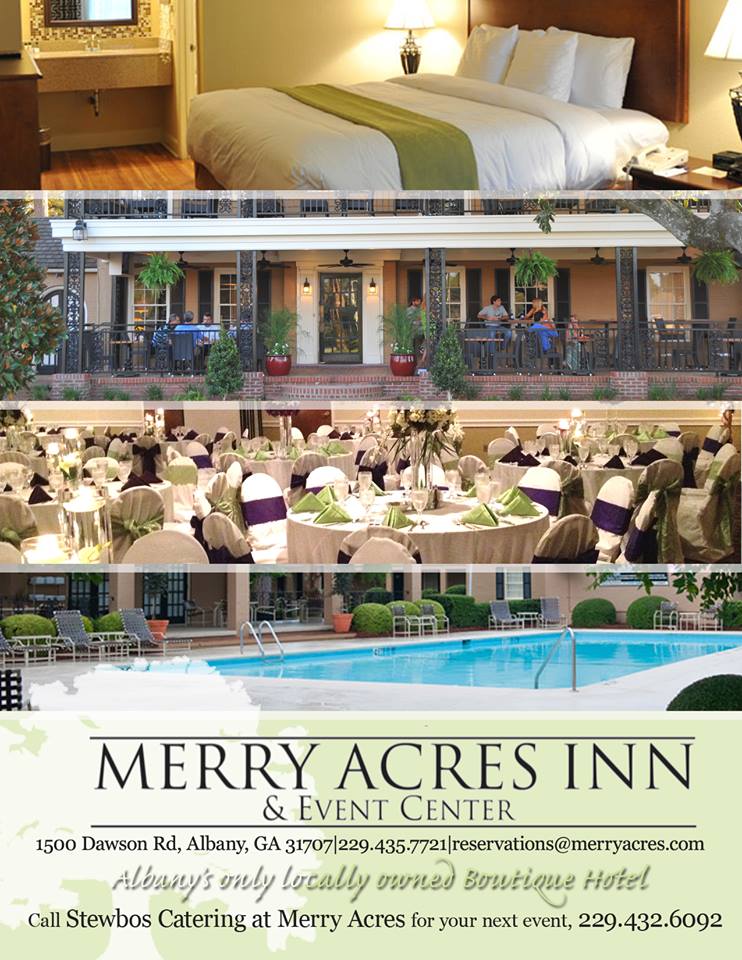 Albany has been a commercial hub of Southwest Georgia since its founding on the banks of the Flint River in 1836. As a marketing center for the region’s cotton growers during the height of King Cotton, it was also a railroad axis that transported cotton and later diversified crops such as peanuts and pecans to other regions and vital ports of the United States.

Mrs. Grace astutely landscaped the property surrounding the 1934 manor house, planting pine trees, azaleas, and camellias. Pleased with her embellishments, she named the home “Merry Acres” and also had a rock building constructed, calling it the Dutch Oven, where she made sausage and cooked chitterlings. This building still stands by the pool area, and the original barbeque pits and outdoor fireplace are still in use today.

The property eventually passed on to the Graces’ daughter and son-in-law, Jean and G.G. “Spec” Dozier, who had married in the garden. Spec had been in professional baseball, but made the venture to establish Albany’s first motel on this very property. The 22-unit motel centered on the former manor house (which became the registration area) and included guest cottages and a swimming pool.

The rock building and former smokehouse was turned into a two-bedroom suite in 1968 when 30 more units were added, and a pool was added at a new site just behind the registration house.

More renovations and additions took place in 1975 and 1989, and by that time ownership and management had passed from “Spec” to his children, Gerry Dozier and Gail Stanfill. Gail’s husband, Bill Stanfill, a University of Georgia All-American and Miami Dolphin Super Bowl champion, operated the very successful Merry Acres Restaurant for years.

Merry Acres was named by its hotel system as Inn of the Year six times during 1989 and 2009; for the 2009 accolade, it was selected from among 1,260 other hotels within its franchise brand. Also, Merry Acres received 16 consecutive Gold Hospitality Awards as well as four consecutive Platinum awards. 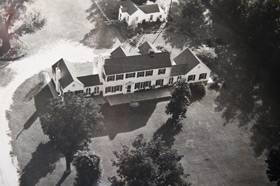 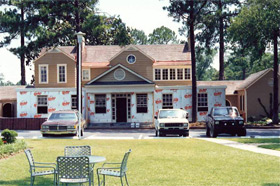 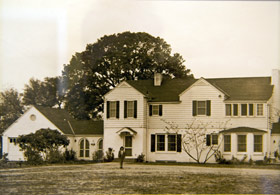 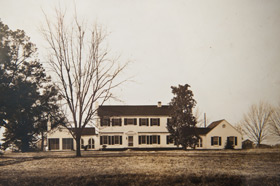 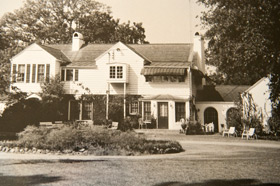 2011 was a landmark year for Merry Acres Inn. That’s because this traditional, Southern gem of a hotel gained new owners who embarked on a significant renovation of the hotel and its campus. It now operates independently as a boutique style inn with the amenities and flair that sophisticated travelers have come to expect.

Such a natural progression is the vision of local entrepreneurial duo Bo Henry and Stewart Campbell. Both Albany-area natives, their own success is tied to that of Merry Acres, as well as Albany.

“This is our hometown; we’re from here and are going to continue to live here, and we agree that it’s important to grow our businesses here,” explains Henry.

This unsurpassed level of commitment, along with a family-imbibed history, appealed to Henry and Campbell.

“The Dozier-Stanfill families are friends of ours, and we have overwhelming admiration for them and what they’ve accomplished through Merry Acres,” cites Henry. “We’re extremely excited about this new enterprise and having the honor of being able to continue the Merry Acres legacy.”

An element of Merry Acres’ success hails from having loyal, exemplary and attentive staff, many of whom have served the company for decades. In keeping with that tradition and to ensure further continuity, Henry and Campbell kept the longtime staff. 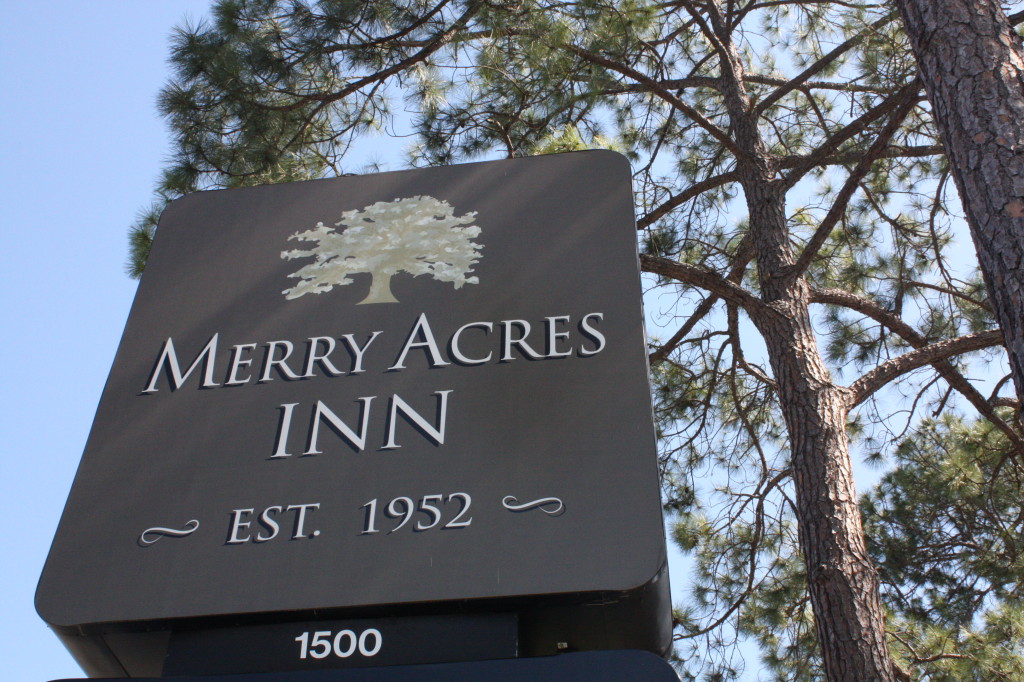 Henry and Campbell have a family connection themselves. Married to sisters, they joined forces in 2006 and now own and manage three local Albany restaurants and a catering business under the umbrella of the Stewbos Group.

“Our endeavor with Merry Acres Inn fits nicely with what we’re already doing in regards to service, events, and hospitality, yet it also provides someone a superb place to stay,” cites Campbell.

The central hub of Merry Acres Inn not only remains, but is flourishing after a 2011 makeover. It’s the original 1934 two-story manor house and country home that has served as the registration office for decades. One of the sitting areas has been expanded and transformed into a cozy and welcoming bistro and lounge named the Manor House Pub. Here, guests gather inside our out on the porches – downstairs or upstairs — to enjoy drinks, refreshments and light bites such as small chicken salad, tuna salad, and pimiento cheese sandwiches. Also, the beer, wine and cheese receptions historically held in the nearby gazebo are now held at the Manor House.

The guest rooms themselves were completely and tastefully upgraded by a design firm that specializes exclusively in conceptualizing and implementing interior design solutions for the hospitality industry. Collaborating with local artists, photographers and decorators, the designers imbibed Merry Acres Inn with a sumptuous, upscale and comfortable ambiance. In addition to new flooring, plush bedding, and luxurious window treatments and upholstery, there are granite counter tops and coordinating mosaic tiles for vanity mirrors. 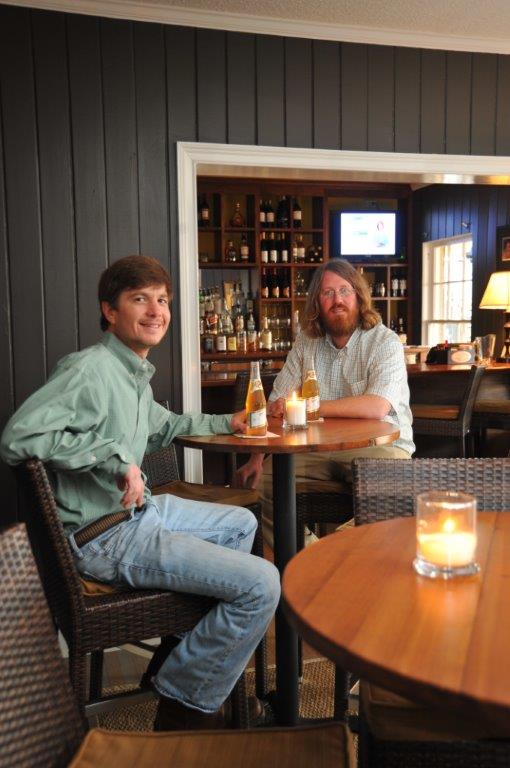 Stewbos Group owners Stewart Campbell (left) and Bo Henry compliment the hospitality services they offer at Merry Acres Inn & Event Center with three nearby restaurants — each with it’s own niche in the community.

The overall design theme is Southern traditional, yet allows for contemporary necessities such as flat-screen high-definition televisions and wireless internet service throughout the property. All fabrics, linens and furniture coordinate throughout the guest rooms, registration office and event rooms.

All guests of Merry Acres Inn now have complimentary transportation to and from Southwest Georgia Regional Airport. And, guests also have a free shuttle service to and from the three signature restaurants of Stewbos Group. With three distinct cuisines to choose from, these restaurants have something for everyone in Albany. Guests can enjoy lunch or nightlife at Harvest Moon Pizza with the Bo Henry Band; seafood at its best at The Catch Seafood Room & Oyster Bar; and fine dining and epicurean delights at Henry Campbell’s Steakhouse. (For the restaurant menus and more information, visit www.stewbos.com.)

Merry Acres Inn also features an event center and restaurant that have for decades been favorite sites for wedding receptions, rehearsal dinners, banquets, corporate seminars and retreats, class and family reunions, showers, birthday parties, and fundraisers. That list has recently grown to include private parties, cocktail parties and wine tastings.

Henry and Campbell draw upon their own histories and experiences growing up in this tight-knit South Georgia community. And, Merry Acres will continue to be an esteemed destination for lodging and events, as well as exemplify the charm and hospitality for which Southwest Georgia is known.